Opinion: To suggest a couple of cocktails can sway B.C. politicians is insulting

I read with amazement about the debate over whether municipal politicians should attend the reception to be hosted by the Consulate of the People’s Republic of China at the 2019 Union of B.C. Municipalities Convention, to be held Sept. 23-27 at the Vancouver Convention Centre.

The central arguments against attending can be summed up in two points.

The first is that as a result of China acting in a hostile way toward our country, we should not have any contacts with its officials. The second is that if our politicians attend the reception, they will end up under the influence of the Chinese officials. 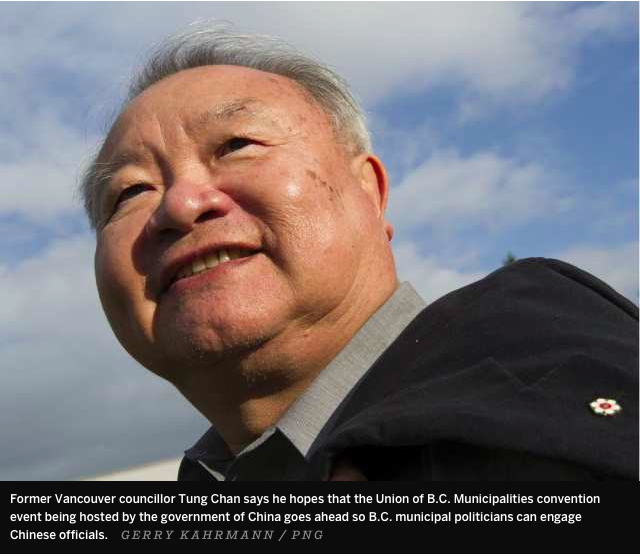 There is no doubt that China is acting in a heavy-handed way toward Canada. But this is precisely the time that more dialogue between our two countries is needed. Even Prime Minister Justin Trudeau tried to talk to Chinese President Xi Jinping at the recent G20 meeting in Japan. The reception at the upcoming UBCM will give our municipal politicians the opportunity to talk to Chinese officials.

As to the second point about being afraid that our municipal politicians would be influenced, as a former Vancouver city councillor and former president of the Non-Partisan Association, I have full confidence that our elected mayors and councillors would not be so easily influenced by a cocktail or two. To suggest otherwise is an insult to their intelligence and integrity.

The fact is influence can go both ways. Why is it that those who suggest boycotting the reception have so little confidence in themselves or other politicians who want to participate of their own power of influence?  Why won’t they consider using the interaction to impress, to the extent possible, to the hosts of the reception in question that Canada is acting the way we are because we are a country that believes in the rule of law?

The points of view of the Chinese consular officials may not be changed but at least there would be constructive dialogue and our local politicians would reinforce the message of our prime minister and the foreign affairs minister.

I believe, with the best interest of our country in heart, we need to open up more channels of dialogue between Canada and China.

Common sense tells us that problems can only be solved through dialogue, not through avoiding contact. It is time for our local politicians to join in the effort to tell China via the Chinese consuls face-to-face the feelings of the people they represent about the actions of the Chinese government. Our local politicians cannot leave that job to our prime minister and the minister of foreign affairs alone.

Tung Chan is a former Vancouver city councillor and former president of the Non-Partisan Association.

Letters to the editor should be sent to sunletters@vancouversun.com. The editorial pages editor is Gordon Clark, who can be reached at gclark@postmedia.com.

Is there more to this story? We’d like to hear from you about this or any other stories you think we should know about. Email vantips@postmedia.com.